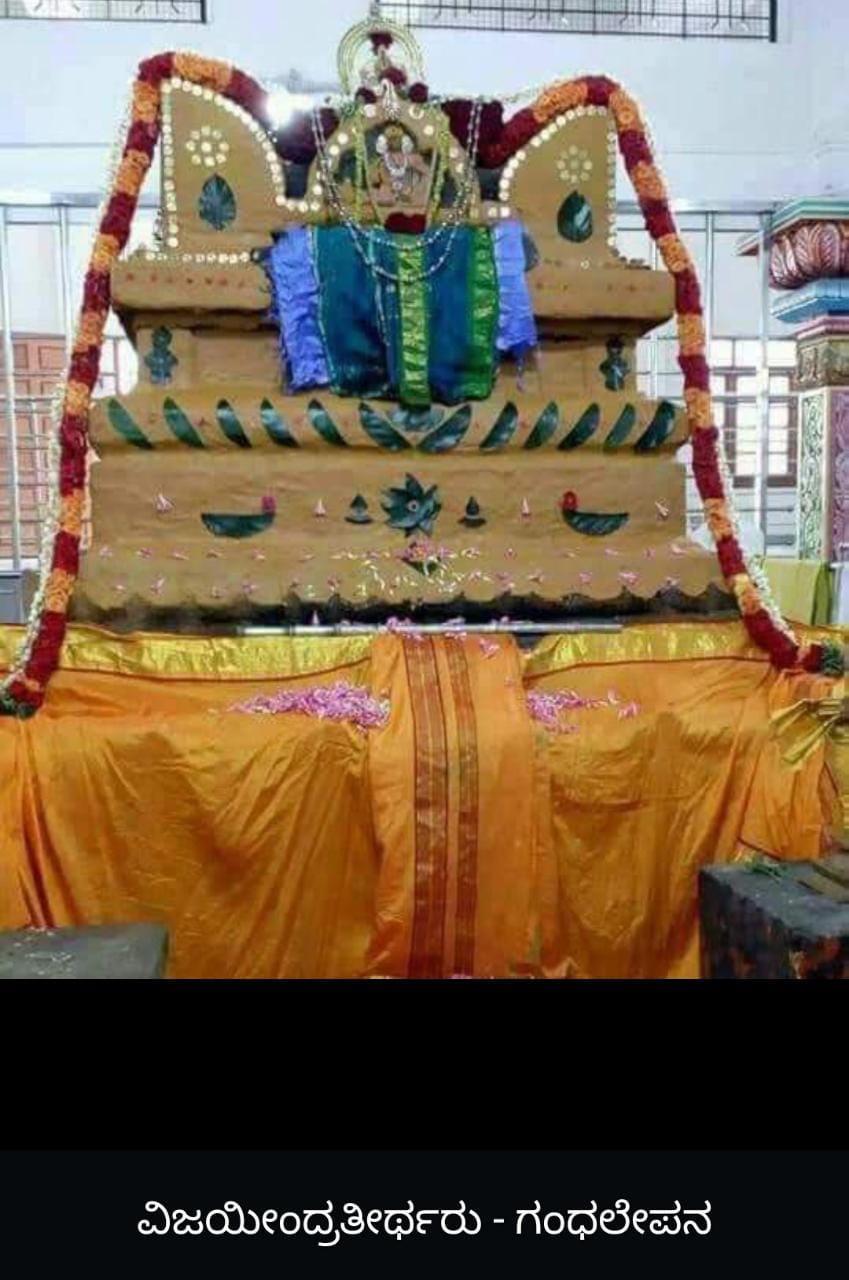 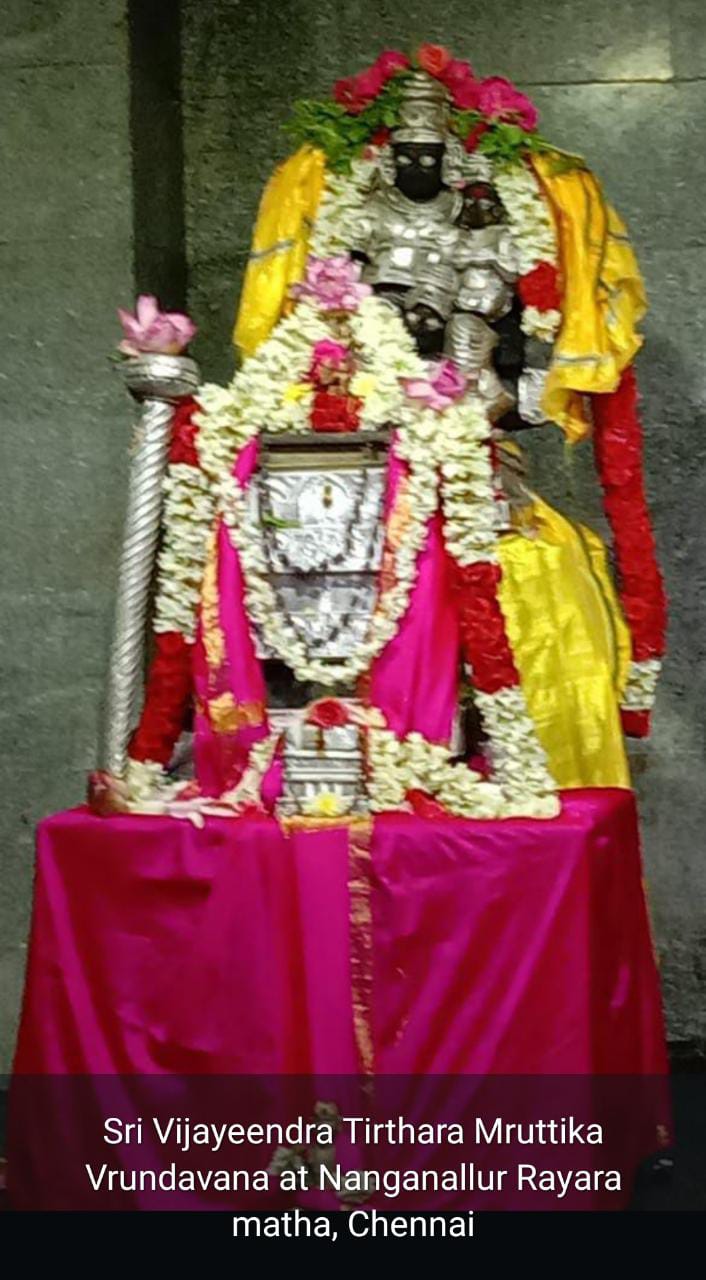 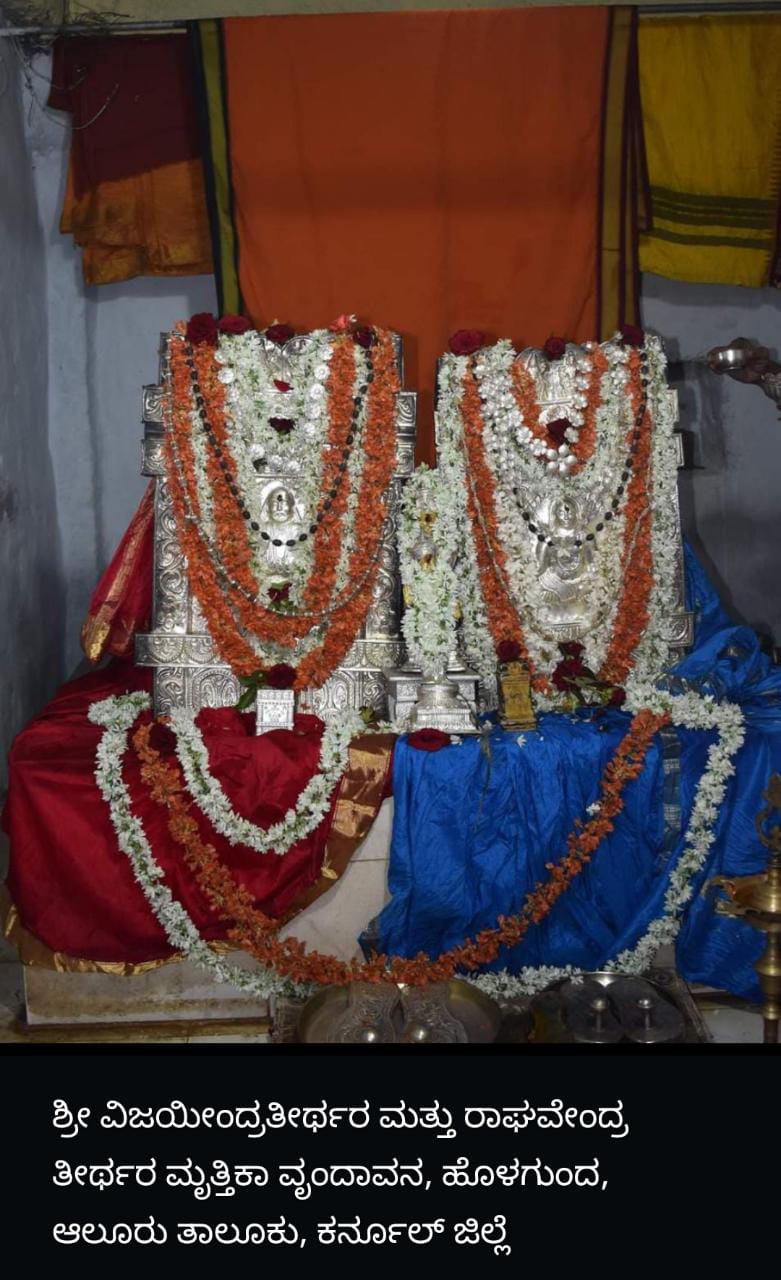 Sri Vijayeendra Tirtharu saved Madhva Siddhanta from a very real and serious threat of extinction in South India, during the 16th century. Hence the followers of Madhva Siddhanta should always remain grateful to the memory of Sri Vijayeendra Teertharu’s great personality. He was a master of all arts. He was master in all 64 vidyas. That is why he was called as “Chatu:Shasti Vidya Praveena”.   When Appayya Deekshitaru, a renowned Advaita Vidwan, challenged about Madhwa Shastra, Sri Vijayeendraru single handedly, defeated him in all sets of arguments which run into many many years and finally Appayya Deekshitaru accepted his defeat.

He was having the knowledge of all the 64 vidyas, viz.,

Once Sri Vijayeendra Tirtharu challenged every one that any body can test him over his knowledge of 64 Vidya. He was well versed in all 64 Vidyaas. On his open challenge, many people tried to defeat and establish their supremacy over him, but none could succeed. Here are some of the instances wherein he mastered over his Vidya

6. Shilpa Kala Praveenyate – He showed his expertise in “Shilpa Kala” also by preparing idols of Ramachandra Devaru, Seeta, Bhoovaraha with candles. He further did many idiols in metals which are even today being worshipped at Kumbakona Samstana. 7. Ornaments making – When an Ornament merchant wanted to test him over preparation of ornaments, there also he showed his expertise and all the judges decided that the ornaments prepared by Sreegalu is the best.

8. Devadasi – When a devadasi wanted to have a “Kama Trupti”, Sri Vijayendraru accepted and asked her to come the next day. Next day, Sreegalu told one of his servants to just touch a flower on her back, when she enters the mutt. So did the servant. The devadasi felt fully satisfied, told that she had fulfilled her kama-pipase and she could not control herself, she fell there itself. When she got up, she accepted her defeat and requested the seer to forgive her and bless with Jnaana.

9. Shaiva Sanyaasees defeated – In Kumbakona, there was the prominence of Shaivaas during that period. They used to defeat all Brahmin saints, pundits through their Mantra shakti, panditya, and make them their shishyaas. When Vijayeendra Tirtharu was on his way to Kumbakona Kumbeshwara Temple, this Shaiva Sanyaasis were coming in a Pallakki, and so was Vijayendraru in another pallakki. It so happened that that the Shaiva Sanyaasis who got down from the pallakki, got up on a nearby wall. The wall was moving with the mantra shakti, and these shaiva sanyaasis were sitting pretty on the wall laughing at Vijayeendraru. On seeing this Vijayeendraru told his servants to remove their hands on the pallakki and the pallakki was moving without any support. In this way, Vijayeendraru defeated them in Mantra-tantra shakthi itself.

10. Adhipathya of Kumbakona –After having been defeated by mantra shakti, Shaiva sanyaasees under the leadership of Lingarajendra, tried to defeat him over Shastra Panditya. There also after severe arguments for many days, he defeated them in all sets of questions and finally they accepted their defeat and surrendered their entire property to him. In this way, the prominence of Shaiva in Kumbakona came to an end.

11. Sarovara Dispute – After Lingarajendra accepted his defeat and went out of Kumbakona, some of the Shaiva pundits could not tolerate their defeat. They wanted to have a revenge over the swamiji. They planned in a different way. At that time, in Kumbakona, all Dwaita-Advaita-Vishistadvaita Brahmins were living in peace respecting each other’s religion. These Shaiva miscreants tried to spoil the Brahman-relationship. So they planned an idea. They told that the “Sarovara” which was lying between Kumbeswara Temple and Sarangapani Temple belonged to Shaivas and that the Dwaitees and other Vishistadvaitees do not any right over the Sarovara. They must never come there. As Vijayeendra Tirtharu was controlling the entire Dharmadipatya of Kumbakona temples, all three groups, viz., Dwaita-Advaita-Vishistadwaita came to Vijayeendraru, who settled the dispute to the full satisfaction of one and all that the Sarovara actually belongs to Sarangapani Temple itself, but it can be used by both the group.

12. Linga turned Hanuma –      Some Shaiva miscreants unable to tolerate this, stayed outside of Kumbhakona, after having been defeated. After a few years, they told that the entire sarovara must be utilised only by Shaivaas. Again both the groups came to Vijayeendraru for decision. He told them not to raise unnecessary dispute as it is being used by both the groups. If it is proved that the Sarovara belongs only Sarangapani, the Shaivaas could not come there at all. But they didn’t accepted and claimed their ownership over Sarovara. Hence, Sreegalu told both the groups that “let us have an search of the Sarovara. If it has more Shaiva proof, then it belongs to them, however if it has more Vaishnavas proof, they it belongs to Vaishnava and that the other groups must never claim their ownership on the Sarovara. They all accepted. These Shaiva miscreants put many Basava idols and thousands of Linga stones in the Sarovara, a day before the fixed date for testing the Sarovara to ensure that there are more shaiva symbols.  Next day- Sreegalu came, both the group leaders also were present to test – to whom the sarovara belonged. Sri Vijayeendraru throwed some abhimantrita mantrakshate on the sarovara. 4-5 people from each got down the sarovara to see the symbols available. To the shock of Shaivaas, the sarovara could give many many hanuma idols and saligramaas. The Basava Vigraha and linga stones which shaivaas had become Hanuma Vigraha and Saligramas respectively to the surprise of all. Then every body agreed that the Sarovara is the property of Vaishnavaas only.

13. Kumbakona – Tanjore– Tanjavur and Kumbakonam were a replica of the Vijayanagara kingdom, in the cultivation of the art of dance, music, literature, Vedic studies and Darshanas (philosophical doctrines). Sri Vijayeendra Tirtha has written more than 100 granthas.  Some of the granthas are described herebelow :

During one of their meetings a lengthy discussion was held between the two about “naaraayaNa”, whether it is telling Srihari or Shiva :

Appayya Deekshita tried to interpret “naaraayaNa” shabda to Shiva in many ways, the arguments lasted for several months, but just because of the last letter “Na” Appayya Deekshita could never win over Vijayeendraru in establishing Shivatva for Narayana shabda.  “Na” can be used only for Srihari and for none was the substance of the granth.