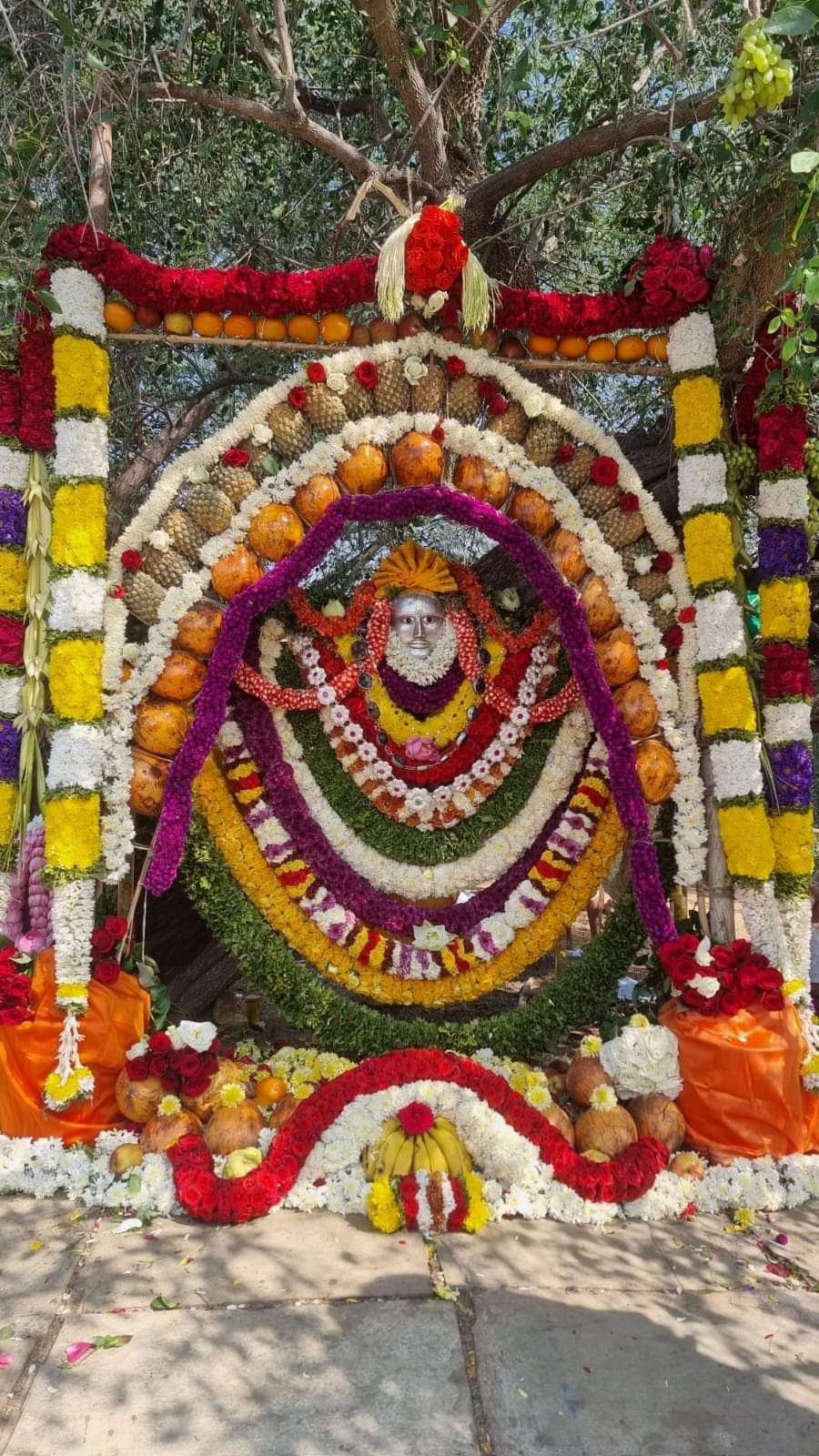 Meaning – Once when he was doing Paata to his students,  under a Gum Tree near Krishnaveni floods of Krishna River came and all the shishyaas ran away leaving the Gurugalu Sri Jitamitraru.    Sri Jitamitraru was fully immersed in the water.  The flood was there for seven days.  The students thought that the Gurugalu also gone missing in the floods.   But  even after seven days, when the floods stopped, they were surprised to see Jitamitraru at the same place, without being even wet.  Swamiji had sat totally absorbed in meditation.   There was no sign of water touching his body at all.   The students were amazed at this.  That is why the Charamashloka included the same story which tells that he was sitting in Krishnaveni for seven days.

He is the second after Srimadacharyaru to disappear.  Those who have disappeared and for whom no Vrundavana is available are :

There is no vrundavana for him.   But there is one Jitamitra Gadde, in a Gonada Tree  (Gum tree) 30-32 kms from Raichur Krishna-Bheema River basin, Shivapura, Shahapur Taluk in Gulbarga District.  It is the place where he was last seen and disappeared.  It is believed that he is still there in Jnaana Roopa in the tree.   That is why this place has been maintained as a monument. Ananthappa lost his father at a very early age.   He had a elder sister, who also had lost her husband at her young age itself.      Even though she was young lady, she was expert in land management.    She herself carried the entire responsibility of the family.    At his age of 8, he got upanayana.

Assisting his sister in the fields –

Anantappa after getting upanayana, used to do sandhya vandana, and all other related pooja.   Then he used to go to the fields alongwith his sister, was assisting his sister in all her land related works, plouging the fields, grazing the animals, etc.  He used to wear Yagnopaveetha only during Sandhyavandhane and during Bhojana.  During other occasins, he used to hang to a shelf in his house.

Narasimha saligrama given to Anantappa –

After staying in his house, for several days, Sri Vibudendra Tirtharu, was very pleased with Ananthappa, and gave him narasimha Saligrama which he was daily worshipping and instructed him ” Do daily snaana, ahnika, do the abhisheka to this Saligrama unfailingly,  offer Gandha-akshate,  and do the naivedya”.  Vibudendra Tirtharu knew that this Anantappa is none other than Rudramsha sambootha and Narasimha devaru is the upasya moorthy for Rudradevaru.  That is why he gave that saligrama to Anantappa.

After Sri Vibudendra Tirtharu gave him the Narasimha saligrama, Anantappa was thrilled.  He used to do as per the instructions of Vibudendra Tirtharu, by taking bath early in the morning, he was doing pooja, alankara, etc.   He had prepared naivedya for Narasimha Devaru.  One day he wanted to do the samarpana of naivedya directly to the mouth of Narasimha Saligrama.   He had thought the saligrama will take the naivedya directly, so he offered naivedya to the saligrama, in vain.    Then he told Narasimha devaru, that if he is not opening his mouth and accepting the naivedya, he will hit himself with the saligrama.  He started hitting his head with the saligrama, then Saligrama’s mouth opened.  Ananthappa fed the food which he had kept for naivedya and Narasimha devaru ate it.   Like this daily, he used to offer food for Narasimha Devaru, which used to accept the naivedya.  And only after Srihari in his Narasimha roopa accept the food, Anantappa and his sister used to eat the food.   Years went on like this. Get down at Yadgir railway station and from there take either Bus or any local vehicle to Sangam get down at Jitamitra Gadde.

Raicur (take Intercity train @ 7:00 am)   get down at Sydapur Station (Narayan pet road)

From Sydapur follow the route mentioned above. ( Distance approximately 270 km)