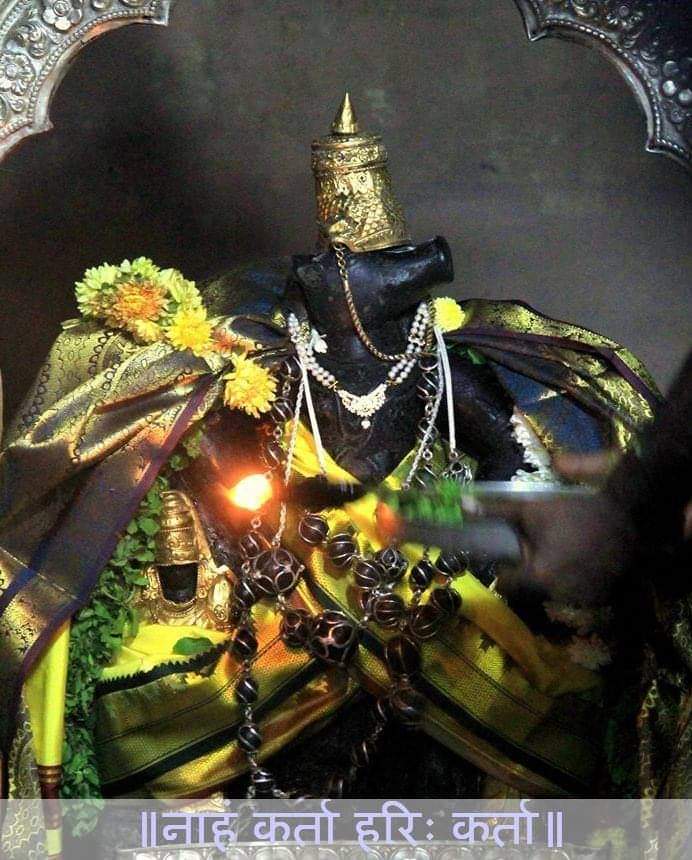 In Vishnu sahasranaama stotram, the name “mahavaraaha:” has been attributed to Srihari; as he destroyed the great daithyaas or he is called as Mahavaraaha as he came out of the nose of Brahma and took the boar (pig) avataara.

Who is Varaha ?  –  This is the avataara of Srihari to kill daithya Hiranyaksha and bringing back the earth. This is the third amongst the dashavataara.   Acharya Madhwa has clarified that Varahavatara has happened twice.    The varaha roopa has the head of boar (pig type) and the body of a human.

Necessity of the birth of Varaha –    Chaturmukha Brahma, who took the birth from the Padma, the novel of paramatma, created “Swayambu manu” and others.    Hiranyaksha, who was born from Brahma Devaru had taken the entire bhoomi and dragged it to waters.   All the gods, appeared before Brahma devaru.   At that time, Narayana appeared in the form of a tiny Varaha rupa from the nose of Brahma.    The little Varaha which came out of the nose of Brahma, grew, grew and grew like that of a mountain to every body’s surprise.

Chintana of Varaha Roopi Paramathma as per Tantrasara sangraha of Acharya Madhwa :

Varaha roopi paramathma’s body colour is blue.   He has Chakra,- Shanka,- abhaya and vara mudre in his four arms.    He is accompanied by Bhoodevi and his entire parivara of Brahma Rudraadi devate.    We have to do the smarana of Srihari for our SakalaabhiShta siddhi.

Varaha devaru in Tirupathi –   In Srinivasa Kalyana, we can see the story of Varaha Devaru.   Srinivasa came to Tirupathi and sought some place with Varaha Devaru for his stay.  Varaha, the other roopa of Srihari agreed and gave him some space and in return Srinivasa offered him the first darshana to Varaha before Srinivasa at Tirumala.  The first naivedya shall be offered to Varaha Devaru then to Srinvasa.

Varaha devaru has other names like Kroda, Sookara, DharaNidhara, Bhoodhara, Mahidhara, etc.    In Vishnu Sahasranama, Srihari is called as “Maha varaha” which Acharya Madhwa has defined in Bruhadaaranyakanishad Bhashya – as Lord Vishnu in his incarnation as Lord Varaha,has lifted the earth which was hidden by the powerful daitya Hiranyaksha in the ocean, and killed the daithya Hiranyaksha. Lakshmi Varaha Temple located at Demal Village in Aul in Kendarpara District in Orissa is one such rare temple. The Varaha murti worshipped at the temple is made from a single piece of black stone. The temple also has the footprints of Lakshmi Varaha.  Varaha is worshipped alongwith Sridevi and Bhoodevi. As per Narada Purana – Varaha Rupi paramathma brought back the Earth from sea and removed all the miseries of the world.  Bhudevi prayed Varaha Devaru not to leave for Vaikunta and wished to worship him always.  Pleased with the worship of Bhudevi Varaha devaru stayed at that place, where Bhumi (earth) was brought up – that place is none other than Srimushnam.  Since Varahadevaru stays with Bhudevi, he is called as Bhuvaraha Murthy.

In Srimushnam – Any daana done would fetch more punya.

Sri Varaha devaru, the Shwetha Varaha is the final destiny of the entire world.  – You are the supreme of all devataas – You tore off the cruel and daitya Hiranyaksha with your teeth – You are Sukachit tanu, i.e., your body consists of ever happiness and jnaana –  you are sporting in Srimushnam kshetra by embracing Bhudevi romantically.

Srimushnam is one of the swayamvyakta kshetra where we can find Bhuvaraha Devaru.  This is also called as Varaha Kshetra.   The vigraha in Bhoovaraha ksheta is not sculptured by any human but is a formation of the stone saligarama (black smooth round stone) and is also called ‘Yagna Varaha’.  It is said that lord vishnu resides in this particular place in three forms. One in the form ‘Ashwatha tree’, second as ‘Nithya Pushkarani’ and as ‘Bhoovaraha Swamy’.

It is said to be the ‘Avatara sthala’ of Sri Varaha swamy. After Sri Vishnu killed daithya Hiranyaksha who was under the sea taking the earth, Sri Varaha is said to have rested at this place with the water sweating from his body forming the pushkarni here. Hence a bath at this pushkarni is very much sacred.

It is said that in this kshetra, the Varahadevaru is worshipped first by Brahmadevaru and Saraswathi devi.

Sri  Acharya Madhwa was camping in Srimushnam a place twenty-six Km from Chidambaram in Tamil Nadu, observing the Chathurmasya vritha.  To remove the thirst of a pregnant lady he produced water with his Danda.  The Danda Teertha in Srimushnam is a notable holy spot for Maadhwas. This Danda theertha is about 2 km from the temple and about 1 km walkable distance from the main road.   In this way, there is presence of  Sri Hari (as Varaha) and Sri Vayu (Danda tirtha).

Srimushnam Varaha utsava murthy and Uttaradimutt –   It is traditional privilege that whenever a seer of Uttaradimutt visits Srimushnam, the Utsava murthy with Sridevi and Bhudevi would come to the mutt and puja is performed the UM Swamiji to those deities along with  Ramadevaru.    It is in practice since Sri Satya poorna Tirtharu’s period.   Sri Satyatma Tirtha Mahan has recently built building at Danda Tirtha and renovated for the benefit of the devotees here.