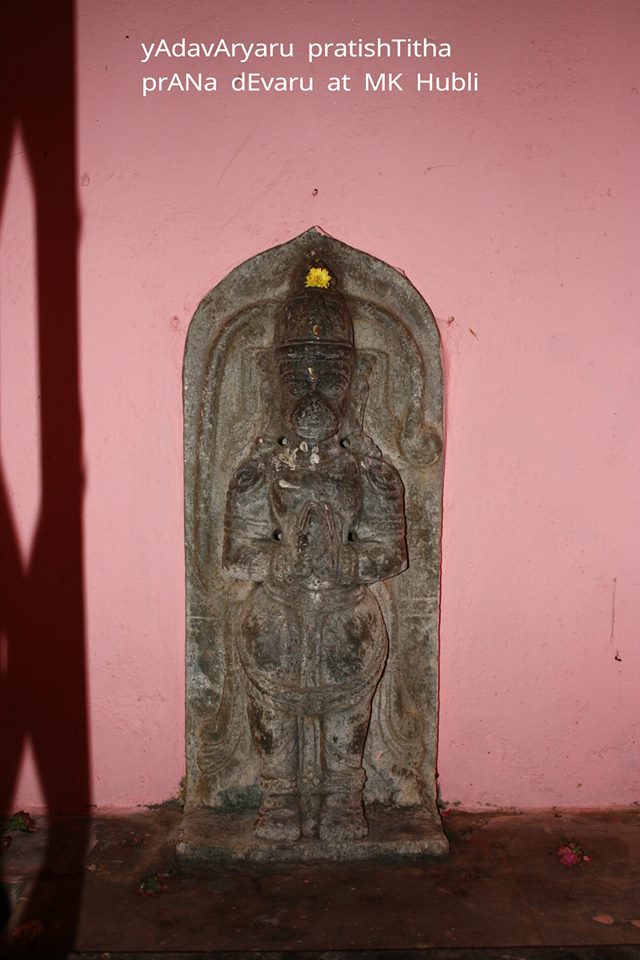 Sri Bhagappayya – He is Yadavaryaru’s elder brother – who got sanyasashrama and Vidya from Sri Raghottama Tirtharu. He left the Peetadhipathiva and toured all over India for the paata – pravachana. He specially looked after the education of Yadavaryaru. He is none other than Sri Vedesha Tirtharu

Sri Krishnappa – He is Yadavaryaru’s younger brother. He died at an early age. His son is none other than Sri Bidarahalli Srinivasacharyaru, who was given vidya by Sri Yadavaaryaru.

Yadavarya was doing jewelery business. Though he was involved in the jewelry business and was very rich, he never exhibited at any time. He was performing sales by going through places to place on foot. Whenever he was leaving the house, he used to offer first prayer to God reciting:
agrathO naarasimhascha

meaning – Narasimha Devaru in the front, Sri Krishna to our back side, and Rama Lakshmana to our side well equipped with weapons will follow wherever we go. We must have the anusandhana like this. They will protect us wherever we go.

This shloka to be chanted by every one who goes out of his house.

Once a set of dacoits were planning to snatch the bag from Yaadavaryaru. These thieves happened to observe always two soldiers on horse back guarding him. The thieves knew that Yadavaryaru had no horses as well as riders. They were surprised. One day they approached Yadavaryaru in disguise and asked him as to who were the riders on horseback always accompanying. Yadavaryaru, was shocked at this question and replied that there no bodyguards to him. The thieves told him that that they saw two bodyguards backing him.

Whenever they attempted to plunder jewels from him.  These bodyguards used to disappear the moment they entered his house. They wanted to know the secrecy of this incident. He remembered that it was the effect of the sloka he used to recite before leaving the house. He felt sad that Raama Lakshmana who were visible to them did not give Darshana to him. Yadavaryaru said that they had taken lot of trouble for his sake. They had the Darshan of Rama Lakshna and were very fortunate compared to him. He said to dacoits that he would voluntarily donate all the wealth to them and to take with them. These dacoits understanding the significance of “ Rama Narasimha and Krishna“ mahime, surrendered before and took an oath that they would never do robbery in future.

He donated the whole wealth like Sri Puranadara Daasaru, and went to Kaashi and became a pundit. He came back to his place where Sri Vedhesha Tirtharu of Sri Uttaradhi Mutt was staying. He studied many aspect of Madhwa philosophy.  Sri Vedesha Tirtharu decided to quit the peetadhipathithwa for paata pravachana.

He had many disciples in Karnataka and Maharashtra. He was a guide to many. There is yet another saying that Sri Raamachandra gave darshan to him on the banks of the river Godavari.

Srimadbhagavatha heard from his bones – Srimad Bhagavata was his life blood. It is said that Bhagavata Verses were heard from his mortal remains (even his bones were chanting the Bhagavatha) after his death. He devoted his entire life to fulfill the wishes of his guru Vedesha Tirtha.

Vairagya – Even though he had good quantum of wealth he had donated the entire wealth to others and went out like Purandaradasaru.

Once Yadavaryaru was very hungry and starving not having food for a long time. He could not get anything for his food. The couple were so poor that they had barely enough food or clothing. The man made both ends meet by begging and whatever he got the couple offered to God before consuming it themselves.

One morning, he was reading Bhagavad Geetha. When he was going through the ninth adhyaya, shloka no 22 which reads as follows :

Meaning – Those who worship me with devotion regularly, without praying the other gods/goddess and does the chintana of Srihari only always – I will protect them in all times and it is my responsibility to look after the welfare of them and that I will give them moksha which does not bring back to Samsaara. These are the words of Srikrishna to Arjuna in Bhagavad Geetha (Adhyaya 9, shloka 22)

After reading the stanza, he thought Krishna may not have said like that. Some one must have wrongly interpreted the word incorrectly as “yogakshemam vahamyaham” and he struck these words in the book with three red lines.

As he had not got food for a long time, he was suspicious about those lines. As the husband set off to seek alms, his wife called out:”There is not a morsel to eat in the house. Get something and come home quickly”.

A while later the wife heard someone at the door. She saw an handsome boy of about 10-12 years years with a huge basket over his head. She could not take her eyes off the young boy, so strikingly attractive was he. “Here, help me put down the basket, Your husband has sent these for you”, the boy said.  She gave a supporting hand and as he bent down to put the basket on the floor, she noticed three ugly red beating on his back, and was bleeding, as if someone had just struck him with a whip. She asked the boy “Oh my God! who did this to you?” she burst out. The boy told, “it was your husband who whipped me because he doubted my willingness to deliver this basket to you”. She asked the boy to wait for some time and wanted to clean the wounds, but before which the boy was disappeared.

Soon her husband returned and was surprised to see his wife busy in the kitchen. She called him and asked him to do the naivedya, hastodaka and that the food is ready.

He was shocked. Sometime back she had told nothing is there in the house, now how come such items for preparation of food. Then she told him that ” you had sent that huge basket full of fresh vegetables, and grains, enough to last us six months. But why did you beat the handsome young boy and inflicted three ugly red lash-wounds on his tender back?”

He was shocked as to how can send such huge items to the house with anybody, as he had not received on that day. And he told that he has not many anyone and not beaten anybody.

He rushed to the Gita he had been reading that morning and open the page which he was reading. He observed that the three lines which he had striken were missing in the Yogaksheyamam vahamyaham verse no 9.22.

Now, he realized that it is the same srihari, whom he had doubted for some time during his hungry, who had sent the vegetables and all the grains to his wife in the form of a small boy. He prostrated before the god’s idol and sought excuse for his ignorance.

Then he turned to his wife and told her that the boy who had delivered the vegetables and grains was none other than Srihari himself.

Bidarahalli Srinivasa Tirtharu and Yadavaryaru – Bidarahalli Srinivasa Tirtharu who has written many granthas, and teekaas is one of the Shishyaas of Yadavaryaru. Once he had gone to Mantralaya during Chaturmasya and refused to take the naivedya as they use “saasuve” for cooking. As such, special cooking without sasuve was prepared for him. After receiving the mantrakshate one for him and one for Yadavaryaru, he returned home and was surprised to see that the Mantrakshate handed over to Yadavaryaru was in regular colour whereas his mantrakshate had turned black in colour.

Then Yadavaryaru came to know that Srinviasacharyaru had not taken the naivedya with Saasuve at Mantralaya and that is why the mantrakshate had turned black. So he asked him to go back to Mantralaya and take the prasadam as per Rayara Mutt sampradaya which he did.

During his time there were many madhwa peetadhpathis, and pundits – some of them are :