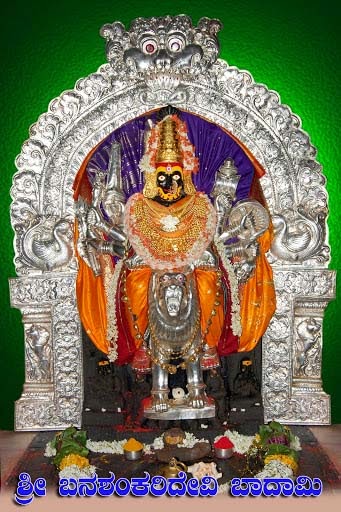 Banashankari is derived mainly from the word “vana” or “bana”. She is also called as Shakambari. She is said to be the incarnation of Parvathi. As per Skanda purana, when there was severe famine, for hundreds of years, gods did penance at Shiva to please him. As per Shiva’s advise they all did the prarthane to Banashankari devi. Pleased with the devotion, Banashankari made famine free and the land got good rain and was sufficiently filled with food articles, and the entire jeeva rashi felt happy. Banashankari also killed Durgamasura at Badami near Bagalkot District.

Who is Shakambari? – ಶಾಕಾಂಬರಿ – ಶಾಕ + ಅಂಬರಿ shaaka + ambari
shaaka – means vegetables ambari – means one who wears
It is said that Goddess Durga appeared as Shakambari after a dry period of hundred years. She brought fruits, flowers, vegetables and herbs to suffice the hunger of the people.
There are many family with kuladevata as Banashankari. She was the kuladevata for Chalukyas also.

Collapse All Expand All Toggle All
Sumadhwa Seva © 2022